Using my new QA401/QA451 to measure THD+N vs Power for several amplifiers. The results have all shown much lower power than expected for the rated amplifier’s output. Have measured 2 Class D and 2 Class AB amplifiers. The results are relatively proportional and curves rise as expected. For example, a 500 watt Hypex NC502MP is only reporting less than 90 watts output at 1%THD (4 ohm load).

I measured the single-ended outputs of the QA401 at .5 volts (0 db), so increased the gain to maximum (6 db). Still does not drive the amp to anywhere close to rated power. Also am aware that QA451 can only deal with short power bursts. Is the QA451 the reason for apparently low output?

Hi @rasykora, remember the QA451 has a built-in 12 dB attenuation that you must specify in the QA401. In the dBV context menu (control+click dBV button) shown below, just enter whatever your external attenuation factor is. With the QA450, you’d enter -12. That will increase your displayed amplitude by 12 dB.

Before testing at power levels over a few watts, it’s always a good practice to set the QA401 to generate a fixed tone at -20 dBV or so (see Settings->Generate Fixed Tone) and then use a DVM to probe the entire chain and make sure all values you are seeing make sense. For example, if your amp has 30 dB of gain, then you’d measure the input to the amp at -20d dBV (eg what is coming out of the QA401), the output of the amp at 10 dBV, the output of the QA451 at -2 dBV and you’d see the QA401 would report that -2 dBV. And then you’d change the input offset to -12 and the QA401 would report 10 dBV, which is the same that you measured with your DVM. 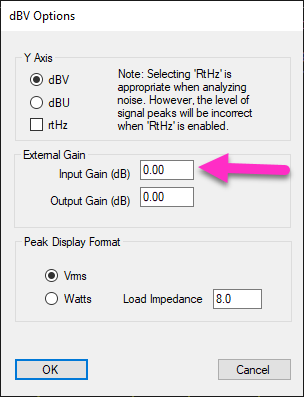 The setting was the issue. The plug-in default was -6 dB. Was using the plug-in and it apparently overrides the setting.

Thanks for the update! From here on out the plug-in should remember your setting. Please feel free to add some plots to this thread if you’d like. The QA451 can use external loads, something the QA450 cannot do. Another user clued me in to these load resistors (linked below). These are significant improvements over most load resistors because 1) They are very cheap, 2) the 100W version can cope with 500W for 1 second (perfect for burst testing), 3) They are non inductive, 4) they are readily mounted to a larger plate (or cold plate) for extended testing.

If you decide to do some higher power level testing beyond the 200W the QA451 is rated for, feel free to ask questions. Your modules are certainly capable.

A couple of things, The Mouser link is broke, but already have some high power resistors and heat sinks to mount them. The other is how to wire the additional load? I am not looking to run high power testing frequently, but cannot hurt to know if there are special considerations to use with the QA451.

Oops, sorry, fixed link below. You’d drive the amp into the resistors, and then the QA451 would sense across the resistors. The block diagram of the QA451 is below. The load you add would appear just like the other two load resistors.

At the front of the 6th order filter is an attenuator. This gives 12 dB of attenuation. The supply rails on the QA451 will limit the input to about +32 dBV = 40Vrms = 400W into 4 ohms. Beyond that, the QA451 will exhibit rising distortion that you probably won’t notice on a normal class AB or class D, but it might limit performance on some state of the art amps. So, the solution is to build a divider from the loads.

An example divider could be as simple as two 2 ohm resistors in series. That let’s the amp see 4 ohms, and the tap the QA451 across one of the two ohms. That would give another 6 dB of attenuation and take your max power handling up to 1600W if your load could handle it.

YOU MUST MAKE SURE YOU DO NOT ENABLE THE 4 AND 8 OHM POWER LOADS INSIDE THE QA451 AT THESE POWER LEVELS.