I’ve been working on several phono stages lately and have discovered a nice headroom test that capitalizes on how the QA analyzers work.

The 401 & 402 use a flat drive signal to excite the DUT, and subtracts out the RIAA curve from the received data (using the weighting button). Because RIAA has 40dB more gain in the bass than the treble, a phono stage can be interrogated to reveal its overload structure at low frequencies, where a flat drive signal (and a real world turntable) will always overload first.

Here is the exact same preamp before and after changing the opamp rails from +/-15 to +/-18. This proves my phono stage overload got a lot better! Very cool these boxes can do this. 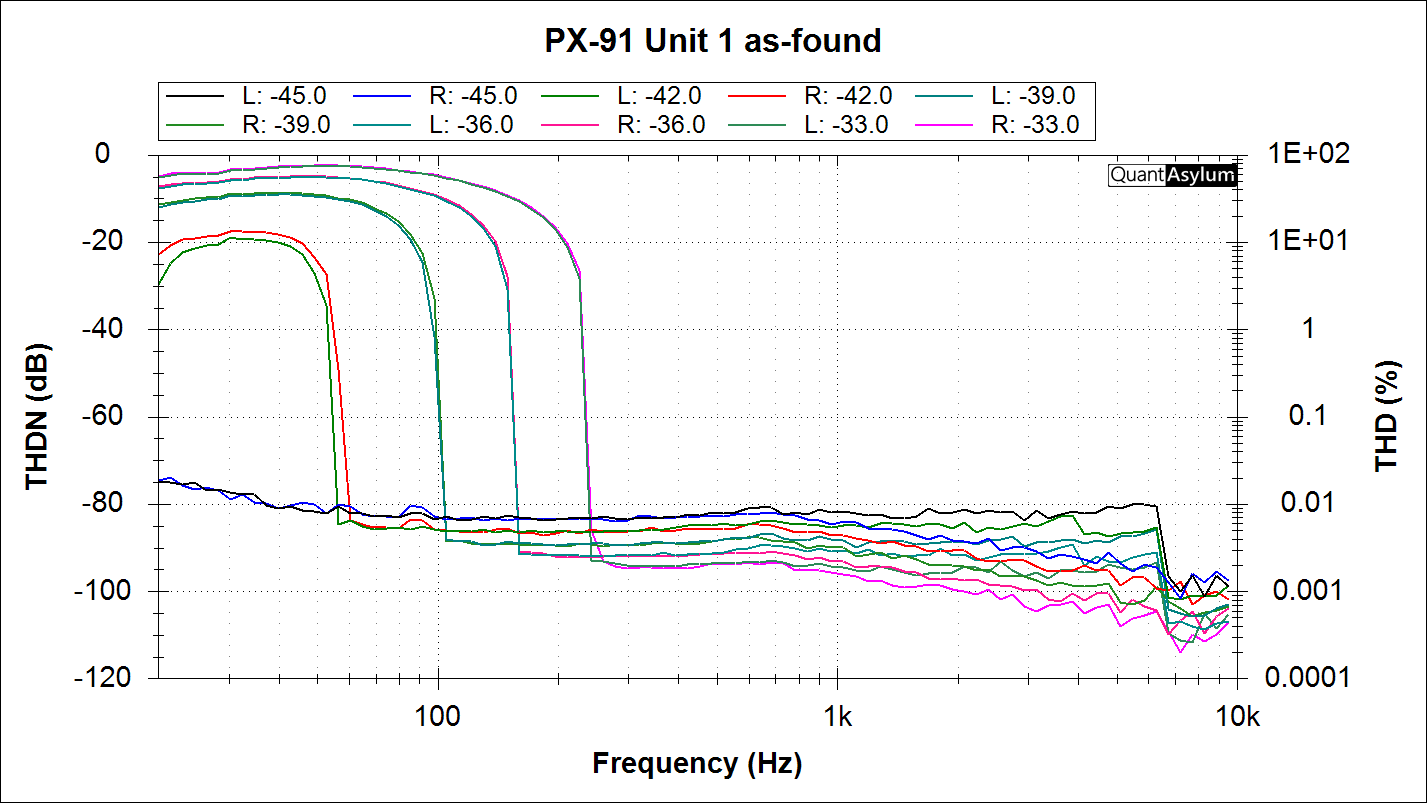 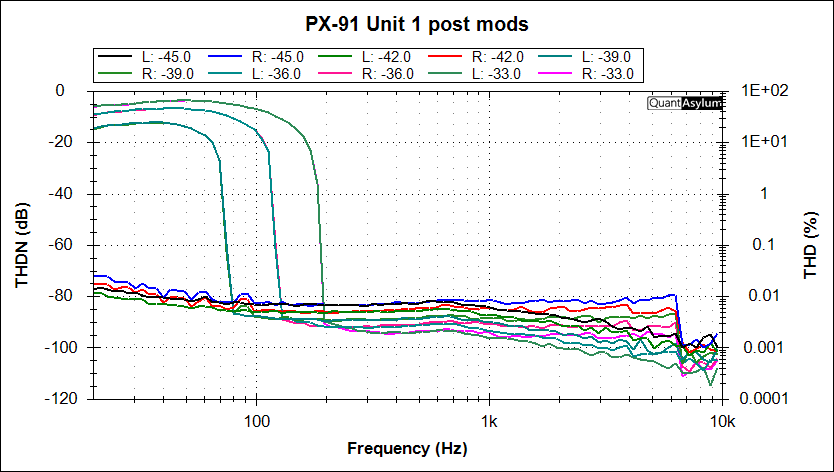 Excellent and thanks for sharing. I’ll use that approach to test phono stages in the future.

It would be interesting to see these curves compared to the traditional distortion curves with the drive signal pre-filtered with the RIAA curve. I find it is actually the high frequencies that overload a phono stage first and as I understand it the test you are showing with equal drive per frequency simply shows the frequency where the the voltage happend to hard clip the stage so it makes sense that increasing the rail voltage pushed the frequency of “clipping” down since it simply added some voltage headroom.

It is true that the low frequencies have the lowest drive voltage and the highest gain but it is high frequencies, particularly at the input gain stage that typically overload first and your test provides just the opposite. It also appears as if the higher drive signals show less distortion at high frequency which also seems surprising.

Here is the same preamp, fed via an inverse RIAA network on the input. QA401 max output is +6dBV so I used that. 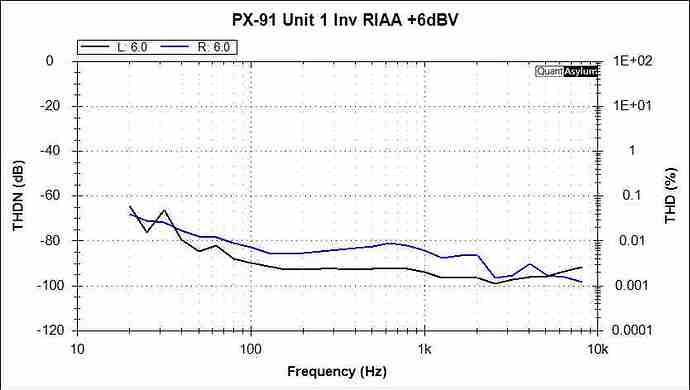 Here I have added 15dB of gain (an Emotiva preamp) between the QA401 output and the RIAA network input. Then I reran the same test.

This gets the flat drive into the RIAA network up to +21dbV or so. I can’t hit it any harder with the gear I have at hand. 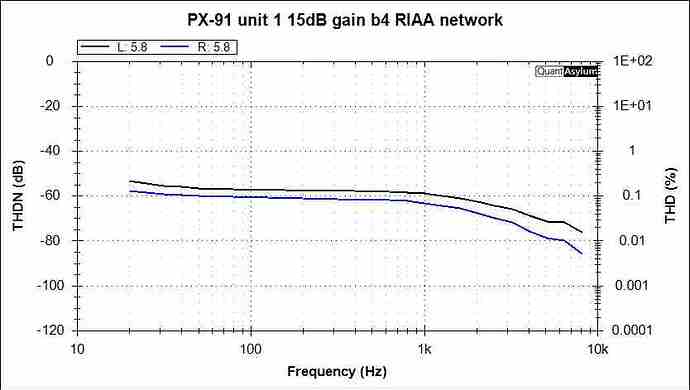 do you have any idea what the input voltage to the phono is @ 1kHz for reference?? +21dBv is like 11V

This is the inverse RIAA board I have https://www.sixacoustic.com/product-page/riaa14 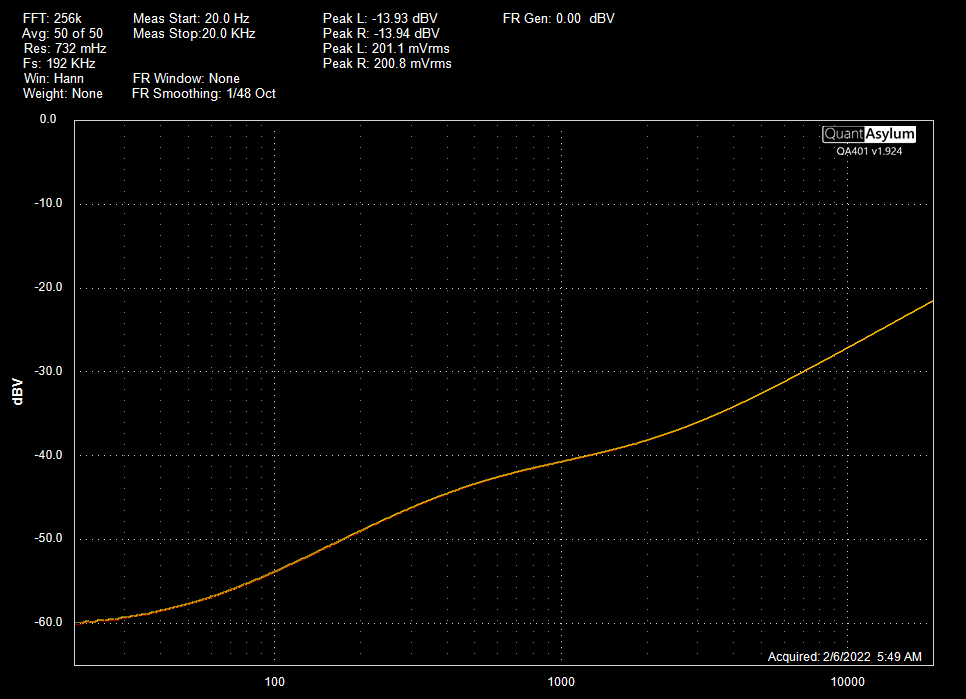 100mV seems impressive this means @ 8kHZ (the area where records have the highest accelerations) that value will be 12dB higher at 400mV. Your test clearly shows no issues. I guess the goal is to get the drive level up high enough to show the drastic increase in distortion and then back of 12dB to allow for headroom.

I was unaware that the iriaa filtering was applied to the input of the QA-40X after the phono stage rather at the output signal from the QA-40X. Is there a way to have the filter weighting applied to the output signal from the QA-40X… this would solve the problem of obtaining adequate drive signals using a passive iRiaa and allow for more than adequate drive to the input of a phono. I see feeding the input with a flat signal as problematic since it represents a ±20dB level error on either side of 1kHz.

I did some spot checks of headroom on this box, here the clipping points I found.

OK… this helps… I converted your measured voltages to dBv and shifted the riaa pre-eq curve by 11dB to match levels at 1kHz. As you can see the 100Hz overload signal level exactly matches the curve but the 8kHz clips at about 6dB less than it should. It is also odd that at 20kHZ the 2000mV signal is again approaching the point where it should be for equal clipping and I wouldn’t be surprised if 20kHz clipped at 2500mV

This brings me back to my question if there is a way to filter the output signal of the QA40X prior to it reaching the DUT for a better look at overload characteristics and linearity with appropriate applied levels? I see feeding it a flat signal and then applying the weighting file to the output to be a flawed test. 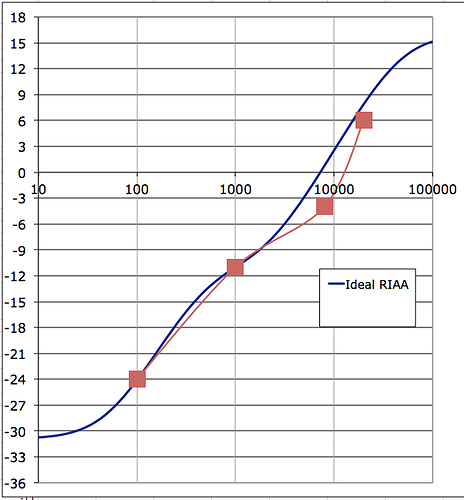