I used REW signal generator with a SMSL SU-9 dac and turned on harmonic cancellation. I ran the balanced signal into the QA403 and got the spectrum below. Is it flawed thinking that I can use this “corrected” sine source for measurement purposes on other dut’s? 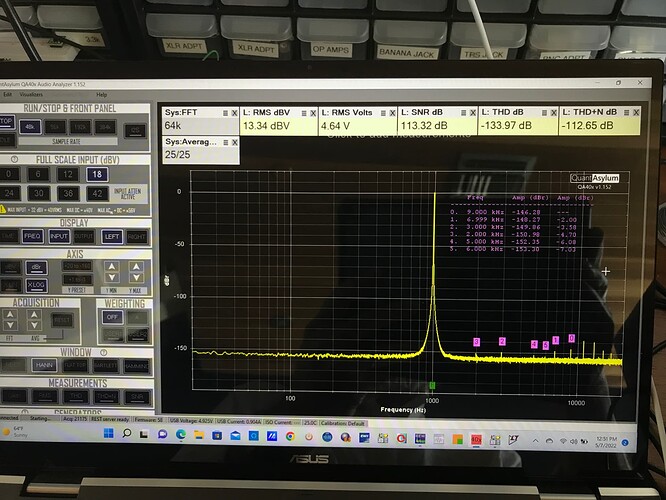 Wow, those are pretty low numbers!

Yes, harmonic cancellation isn’t really useful most of the time because you have contributions coming from two sources: The DUT and the ADC. And so, you never know if the DUT and ADC are combining to make things worse OR to make things better.

There was a megathread on DIYAudio a few years back on harmonic cancellation, and the author of the thread (phofman) made a pretty significant breakthrough where he took a measurement, and then he inserted a low pass filter into the lineup. That delivered a known phase shift. And so, normally, you have a system with two unknowns (phase and amplitude of ADC and DUT). But with the phase shift, you suddenly have another equation, which means you can solve for each.

Now, the calibration challenge is enormous You need to calibrate at every amplitude and frequency. And probably temperature. But it’s a really smart idea.

There are two alternatives: The first is a notch. You need one for each frequency. But as has been shown here, it’s really effective for getting down to around -120 dB THDN, and maybe more.

Second is to use the built-in compensation of the ADC (and DAC). Those won’t get to the notch-level of performance. But it seems able to add another 1-2 dB of margin. I’ve written about this elsewhere, but the performance of a balanced receiver followed by a notch can be very good. As a starting point, look at the OPA1651. That part shows a topology that mostly eliminates common mode resistor tolerance imbalances. Follow that with a diffamp made from a super-tight resistor array with killer R-to-R matching. And then run that through a notch with the largest NP0s you can find and low value Rs for noise. Finally, a buffer with 18 dB or so of gain. That seems the most fruitful approach to getting the best THDN measurement possible.

@matt I see your point but in the case of thd at 1kHz for example, say I tuned my signal source and qa403 combination as above. Now if I run that through a dut, and harmonics above the calibrated levels arise, can’t I attribute those increases to the dut?
I did copy quite a while ago, your twin-t notch and 18db amp using opa1612, etc. and carefully selecting part values. The notch is about -65db @1010 hz as characterized on my qa402 and qa403. I have to move away from the notch center when generate a tone as its too slippery near the bottom. Using this I’ve measured dacs like the smsl su-9 and smsl su-9n down to -120.5db thd+n.
The harmonic cancellation was more intellectual curiosity than anything else. I’ll go read the thread on diyaudio.
On another note there, ivanx, the fellow who builds the cosmos adc, has been touting using a kelken sey lpf and a dac as a signal source to rival a good analog oscillator.
I was going to try that unless you happen to see that as a flawed approach.

kelken sey lpf and a dac as a signal source to rival a good analog oscillator.

Sallen Key? Yes, it’s the right approach. It’s hard to make a resonator (inverse of notch) with fixed gain of 10 dB or so. For 1 kHz, even a single pole low-pass with a corner at 1 kHz will give you 3 dB atten at 2 kHz and ~20 dB at 10 kHz and beyond, so your noise can be really good–maybe 6 dB better than the DAC spec sheet.

The QA40x software is a bit tighter than that. It’s about 400 Hz on either side of the fundamental.

@matt Sort of unrelated but I made this comment on Discord really about statements you have made. Does this make sense to you? This was Ivan who manufactures the Cosmos adc among other devices. I said over at Quantasylum the thinking is measurement devices should be 5-10db better than dut’s. He said,
“ooh, this is 19-century approach

Today the statistical analysis of the collected data is the king. I’m not sure if you did see my THD+N and SNR extrapolations into the sub-residual limit for the Cosmos ADC. “

Statistics can play a part but its gets pretty complicated fast if you want to do that. You get into the confidence level of the measurements. That’s a mix of the accuracy of the instrument and the confidence in the accuracy measurement. For measuring harmonic distortion it gets pretty shaky when the levels are below -110 dB. In my experience frequency domain solutions are the only option down there. And then its complex passive networks.

When nulling both DAC and ADC you learn pretty quickly that you can end up with matching cancellation errors. I was the one who suggested the low pass filter to Pavel. It works and the process did create a very low distortion source, but not better than Viktor’s oscillators so far. It is pretty flexible however. Pavel has been issued a patent on it I believe.

Philosophically I’m not sure it makes meaningful progress on audio at that level. Its on a par with time-nuts fixating on nanosecond errors in their real time clocks. An amazing technical accomplishment (just as physicists are becoming convinced time doesn’t exist) but it won’t affect human perception of anything.

Thx for your explanation. I mess with this as the hobby of a 73 year old trying to recapture an interest from his childhood.
I certainly can’t hear anything anymore but it’s intellectually fascinating and building circuits keeps me busy.

@matt did you make the boxes you refer to here?
Any for sale and if not, a board for sale?

Hi @Moto, yes, the board was made a while ago but still being studied.