I was wondering if there was more info on multitone as it pertains to the QA40x. Have read the AP note on it and several threads on ASR, but would like just a bit better understanding of what it is telling me. For instance, I got this from a receiver I just tested: 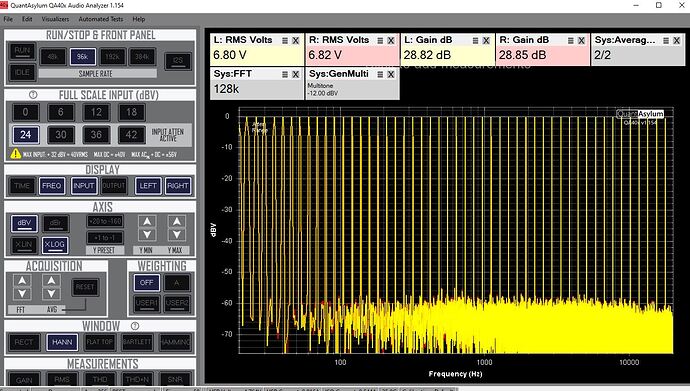 I’m reading this that I have about 55dB or so THD+N ? The normal 1Khz THD +N is ~70dB. I am pretty sure that if I selected either THD or THD+N to be displayed during this multitone test it would not give me accurate results ? Thanks for any input…

Hi @Var, yes, you are right that certain measurements don’t mean much when using multitone as a stimulus. The primary reason to use multitone, IMO, is to see if you can tease out complex IM products that might not otherwise show up because they occur at odd places in the band. In the plot you shared, note the “noise floor” appears to be around -60 dBV. In reality, that probably isn’t noise. It’s a flood of IM components.

On page 21 of the QA403 product brief (linked below) you can see the multitone loopback performance of the QA403. Note that this is a 512 point FFT and that the space between the harmonics extends below -140 dBV. That is what “very good” IMD performance would look like. That is, the level between the discrete tones is very, very small.

On Class D amps, it gets hard to measure linearity with just a tone at higher frequencies, because these amps have output stages that intentionally limit the energy. A multitone test (or even a dual tone test) can reveal things that a normal single tone test in class D. And the multitone takes that to an extreme and does it in one shot.

In short, multitone is a torture test for amps, and it will quickly let you see if the amp has a linearity problem or not. In production, you could hit your amp with a multitone, and know ahead of time that the level between two tones should be below -100 dBV for example. And then spot check a few places across the band without taking another measurement. If the level between tones is where you expect it, the amp linearity is probably good.

Matt-Thanks for taking the time to explain a bit better. I looked at the Q403 multitone loopthru and almost understand it (I think). THe QA403, with IMD products <110dBC across the band, would be pretty good, particularly when compared to my receiver which had IMD products <55dBC or so. What would be a good figure of merit is for multitone for amps (non class D) ? Also, in your Q403 example, you specified a level of 0dBV, but the plot shows the multitones starting at about -18dBV ?

One issue I have with the typical multitone test signals is that the harmonics and IM products all too often are buried under source tones. I wanted to attach a spreadsheet of sets of tones that don’t overlap but its not allowed. I’ll e-mail it to Matt. It turns out this is not a simple problem. Its kind of like prime number sequences.