Time to un-lurk:
Yay, the reason I bought the QA402 has materialized, with fresh v1.100 of the software.
Most of the stuff I build has at least one digital end…
One of such being a cute little I2S to TOSLINK board, this was quickly attached, somewhat makeshift, no proper connector yet: 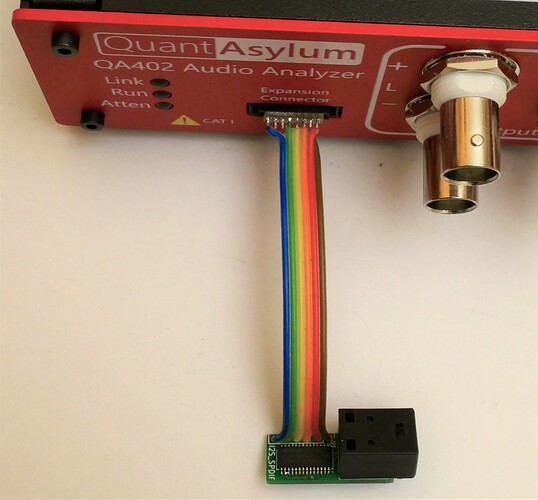 P10228331199×1113 263 KB
It works! MCLK is 256x Fs, format is I2S, only 48 kHz for now. The board uses a CS8406 chip.
With the current software, only the sine generators produce output, unfortunately not the exp chirp, white noise or multitone. Strange showstopper limitation, my expectation was to get the same signal as the internal DAC. Well, extra digital level control appreciated. (The internal DAC is probably always held at or close to 100%, thanks to subsequent analog gain/attenuation?)
What’s the roadmap? Will we get higher sample rate and all generators output? How about I2S input?

On another topic, using the QA402 as an audio interface would be terrific, analog recording with that flexible gain control (perhaps digitizing into I2S), or playback into high impedance headphones. Is an ASIO driver or QA402 as native USB audio device in sight?

No offense, thanks for the feature!
Jörg

Where did you get the board?

Where did you get the board?

It is my own little design, PCB manufactured by JLCPCB. A few more components are on the back side, also solder jumpers to select input format and MCLK ratio. It can also drive coax. Quite handy when tinkering with digital audio. I made two small mistakes, though. One requires the visible solder bridge, the other is a slightly wrong footprint (0.635mm pitch instead of 0.65), makes it a bit difficult to fit the chip.

Wow it is interesting. I would something simmilar just not Toslink but with RCA SPIDIF and until to the 192KHz/24bit… If someone will make project for this let me know please

Is the adapter something that QuantAsylum is thinking about offering in the future ?

Hi @VAR, I think the adapters might be a bit specialized when each are considered. The original aim of the expansion connector was to help an OEM that needs to test a modern class D amp, many of which have I2S built in. But if there’s enough interest something could surely be built.

@IDC_Dragon, excellent! The I2S input likely won’t work given some USB hardware constraints. The expo chirp will take longer as it requires some sync between the internal I2S and the front-panel I2S. The front-panel I2S doesn’t run from the pristine ADC/DAC clock as it’s isolated and it’s hard to get a clock across an iso barrier with anything other than a balun. So, the front panel clock is generated via synthesized 24.576M. The jitter isn’t characterized. But generally the front panel aim is to drive interfaces that are along the lines of bluetooth and class D digital input, which don’t have killer fidelity requirements. Really, really nice work on the expansion board!

Thanks for the reply Matt. I was thinking it may be used to generate a digital signal to apply to a Dac to test them (coax input or usb input), but that is not my area of interest now

Hi Matt, we were thinking of using an Aloo Pi+SPDIF with the I2S interface since it has excellent clocking and a clean signal. See any issue with that?

Which model specifically? The BOSS I2S DAC? It looks like that wants to be the I2S master. The QA402 needs to be the master as it will always output the bit clock and lrclk

Got it, thanks. Do you have any suggestions or should I DIY it? I presume the device should have good enough clocking that it doesn’t become a source of error downstream…

let me check, we might have some boards that you could hand solder to help.

Thanks, that’d be great. Love the product and the support!

Hi Matt, checking if you found any of those boards?

Hi @DanClark, more have been ordered as the REVB boards required a re-work. The REVC boards do not. Should be in late next week and I can send you one.

@matt, are you selling bare boards that would provide spdif output from the i2s connector?

I’m about to make a derivative of the shown adapter, directly suited to the QA402(3?) plug.
However, with current QA software this feature is not really useful yet. The I²S output only plays a static signal, not the measurement sweep. You may as well use a digital sound output of your PC for such.
Hopefully this will improve, it was the buying decision for me…
@matt: I was wondering if the I²C lines could be used for interface setup, so I wouldn’t need e.g. jumpers to configure the sample rate. It would be nice if the QA software could “play” a customizable I²C init sequence, e.g. given as a file. If this is perhaps done in front of every measurement, the controlled part could even be a part of the DUT, not just the interface.

Hi @Moto, the board doesn’t provide SPDIF, I think it just breaks out the signals through an isolator. I can look to see if there are more boards. But you would need to get the parts and hand assemble them. But the isolators used (SI8662 and SI8602, both narrow versus but any flavor) are currently very difficult to find, especially if you aren’t willing to overpay by a lot.

@IDC_Dragon, I think we could make the chirp go out the front-panel I2S without too much work. For the I2C, we’d add a tab to the I2S context menu, and that would let you pick a file with a list of I2C commands to send out. You wouldn’t be able to read anything back. But you could configure something.

that would let you pick a file with a list of I2C commands to send out. You wouldn’t be able to read anything back.

Perfect, rather exactly like I was thinking. No need to read back, just an init sequence. A set of address+value(s) lines or such.
Once multiple sample rates are possible, we’d need either multiple files or sections within one.
Reporting I²C errors would be fair.

I’ll be ordering some other PCBs soon and could add this design.
Now I’m facing the decision to make it hardware-configured (jumpers for sample rate) or already bet on I²C configuration. The later would of course be nicer, but relies on Matt implementing it…
Having a little hen-and-egg problem?
Unfortunately, there has to be a jumper to distinguish between QA402 and QA403, their data lines are swapped. (For good reason?)