In order to test a phono preamp, I need either a 5mV (-46dBV) or 0.5mV (-66dBV) depending whether I am testing the moving magnet or moving coil input. I would be doing a frequency response or THD/SNR testing. The QA402 spec sheet says the max output is +18dBV, with output attenuators of 10, 20 and 30dB. If all 3 attenuators are on you would have 60dB to attenuate the +18dBV or a lowest signal level available of 18-60= -42dBV, which would almost be low enough to test the moving magnet input, but certainly not the moving coil input. When I put in either -46dBV or -66dBV the QA402 will accept it. Could you explain further… Thanks!

The sine generators in the block diagram below are purely numerical (32-bit floats), so they can generate a sine at whatever amplitude you might wish with incredible fidelity. The DAC, being hardware, isn’t so lucky and thus you want to optimally feed the DAC as a higher level. Typically, a DAC will exhibit the best THD around -15 dBFS, and the best THD+N around -5 dBFS or so. Now, after the DAC, there are four atten stages, and the sine generator at full output with 0 dB atten is 18 dBV

So, let’s say you wanted to generate a sine at 0 dBV. What are the optimal settings for sine generator and atten? Well, if we want the DAC output close to -15 dBFS for best THD, then if we set the atten to 0 dB and the sine generator at -18 dBFS, we’d hit our 0 dBV target.

In your case, as you change between -46 dBV and -66 dBV, the output relays will stay the same (you won’t hear a click when you change the value), the only adjustment is coming from the sine generator amplitude in software. 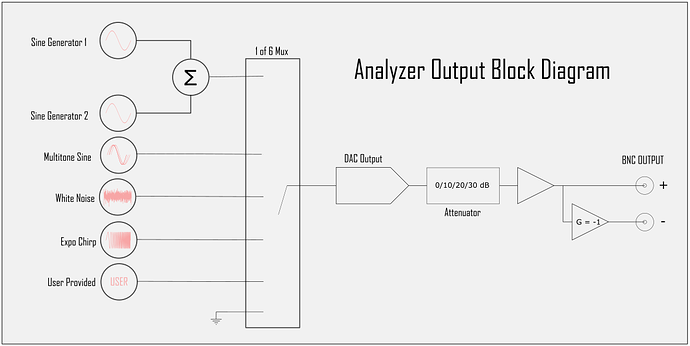 Thanks for the detailed explanation, Matt! I am glad that the software chooses the optimum settings for the sine generator and attenuators. The bad news is this means that my preamp has a pretty crappy moving coil stage

@var I understand how to set the sine amplitude of the Generator but how are you setting the Atten of the dac output that @matt refers to above? On the QA402 I understood the Atten buttons on the app to apply to the input side of the adc, nothing to do with the output of the dac side.

I only adjust the attenuators under the “Full Scale Input”, which it looks like from the block diagram, attenuate the DAC output…

I must be confused then. I thought in other diagrams that those Atten inputs related to attenuation of the signal to the input of the adc. @matt can you clarify this please?

Hi @Moto, there are two sets of attenuators. There some on the inputs (and those are directly controlled by the Full Scale Input buttons). And there are some on the outputs. Those are automatically set when you set the output level.

Thx @matt . I guess what seems confusing in the wording above e.g.,
” So, let’s say you wanted to generate a sine at 0 dBV. What are the optimal settings for sine generator and atten? Well, if we want the DAC output close to -15 dBFS for best THD, then if we set the atten to 0 dB and the sine generator at -18 dBFS, we’d hit our 0 dBV target.”
is that it sounds like a user is to set both the sine generator level and then set output atten level to achieve the given output level in the best possible combination.

Hi @Moto, got it! Upon re-read of my original text I understand your point

I added some more text to make it clear the adjustments were automatic and not something the user must be concerned with.