Am enjoying the 1.16 release so far, particularly having the dbr track, track

and the change of the color of the lettering to orange. And the Harmonics summary display

It is great how the software continually is improving. I do have a request for the AMP THD vs Frequency automated test- it would nice to have an option for specified input levels (say 5 max) for the test rather than a start level, stop level and increment. That way it is easier to desired output powers when testing an amplifier…This option may be useful for other tests but I mainly use the AMP THD vs Frequency automated test.

Hi @VAR, so you’d like to be able to specify “If the amp under test has an output above 5 dBV, then stop” is that right? What would be the purpose of this?

If you try the PWR THD v Power test, that will let you abort a test early IF the THD exceeds a threshold AND you are above a certain power level. Is it similar to that?

Not Exactly. I am looking at a “vintage” Carver power amp right now. I am driving an 8ohm load, but am tapped off it so I am 2.6dB down I know that at -13.5dBv I am getting 5w (all at 1kHz). With .6dBv I get 100w and at 2.4dBv I get 200w. Realizing that the amp is not flat across the band edges, for the most part my traces can be re-named to give the output power level rather than the input signal level, which is more meaningful in this case. It would be nice in this case just to say change the input to -13.5, 2.4 and .6dBv via a list… I looked at the PWR THD v Power test, but I would have to take data at several frequencies and combine the results best I can tell. Maybe it could be automated with TRACTOR, but I have not programmed with it… Thanks for checking into this.

Hi @VAR, OK, so, you’d like THD versus Freq at a constant power, where the level into the amp would be adjusted to account for roll-off?

Matt- that would be great if you were able to do that- somehow run a Freq Chirp and use the data from that to offset the power over freq for the thd vs freq test- but that was not what I was asking for. I just would like to have a “look up table” for the specific input power level(s) that were specified. That input level equates to an output power for me- usually measured at 1khz in my case- but I am assuming the frequency response is flat for the amp…I will try to post a little video later that may explain it better…

Here is a short video segment that explains better what I am doing…?

“It would be nice…” if the name of the settings file that you loaded was displayed on the panel somewhere on the screen, maybe at the bottom where the firmware is listed or the top where the software rev is listed…?

Hi @VAR, yes, agree, it will be added to the next release.

Just in time for Christmas

Thanks for all the nice updates!

I know it’s hard with supply issues, I’m dealing with this as well.

One possible update would be option for a Square wave output to look at peaks and ringing. Currently I just change to my regular function generator.

Many thanks and have a good New Years!

Hi @Botte, the square wave output probably needs dedicated hardware. The reason is that the DAC runs through a digital (and analog) filter, and that filter will limit the slew rate of the edges AND it has its own ringing associated with the DAC filter FIR response. So, a squarewave generated from the DAC would have a slew rate far below that of even a lousy opamp.

Is it slew rate you are wanting to look at?

Yes I look at it for slew rate and watch the front edge for ringing and overshoot.

Not a problem I can keep using my regular Function generator.

Thanks for the reply.

Just being lazy, as you can see the generator is right above the analyzer. 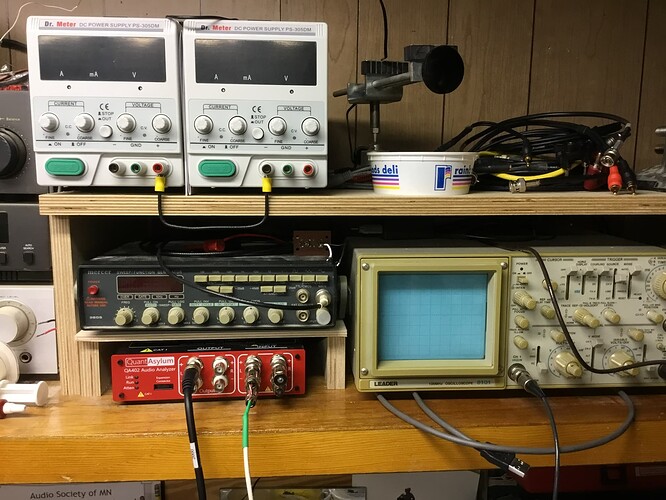