I thought I would share a recent experience I had with my QA402 in hopes that it may save you some time should something similar happen to you. While working on a late 60’s Intg Amp, I noticed there was a lot of 60hz mains noise (and its harmonics) in just the left channel. There was a small 60hz mains noise in the right channel that would have been normal. I had replaced all of the pertinent caps on the left channel that could have been responsible for the hum getting in, and both channels are fed from the same power supplies. I decided to hook up a scope probe to the QA402’s left channel input and probe the circuit to try to figure out what might be causing the hum. I noticed that I was seeing the same 60Hz & harmonics signals w/out the probe connected to anything. I decided to terminate the left + and right + inputs into 50ohm loads, and there was still the 60hz hum, but not nearly as big. Thinking it may be related to the computer’s USB power supply, I hooked it up to another desktop PC and it was still there in the Left channel, but not as bad, and there was some leakage of the -20dBV 1Khz signal. I hooked it up to my laptop and it improved, but was still there. Here are the left channel and right channel plots, with all 4 inputs terminated. 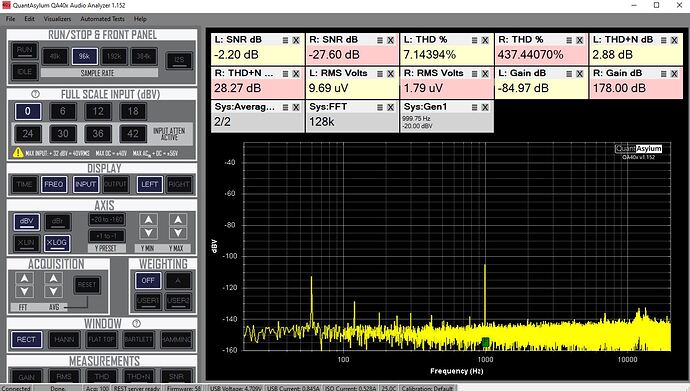 and the right channel: 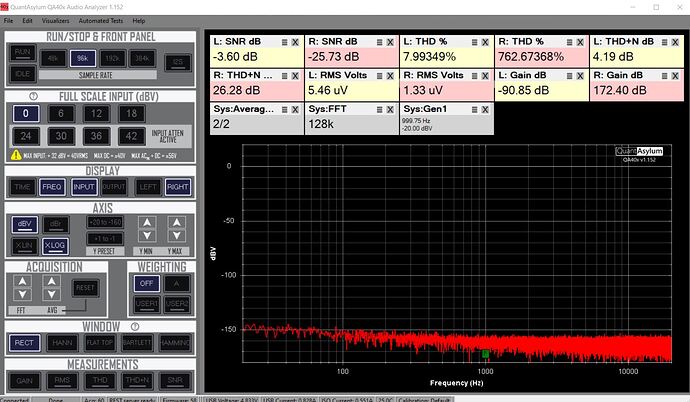 I was getting ready to post to this forum about possibly having a problem with my beloved QA402, when on a whim, I decided to replace the Left - load. The 60hz hum and leakage problem went away! I decided to put the old load back on, and it was still gone. What I think happened is that I must have bumped the Left - load loose at some point, and since it looked like it was on, I just figured the connection was good. Anyway, only about a hour of time lost but a lessoned learned…

I have had similar issues on various occasions. Same fix. Remove and put back the load.
Mine were not loose. My " - " loads are in place almost all the time. When I am setting up for a measurement session, I re-seat them now as a matter of habit. Matt has said these cheap (Amazon) loads do wear out so have a bunch on hand.

Guess we know what to look for. It is not like the loads are removed that often that they should wear out, though…

I have a similar issue, I have my bench setup with my signal generator above the QA402. I was having 60hz noise and when I shut off my signal gen and it went away. So the unit is also sensitive to magnetic fields. Luckily I don’t need the signal gen when I’m using the QA402. 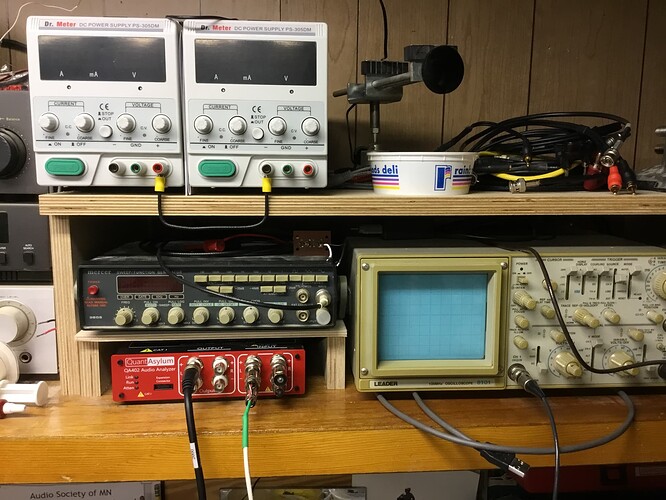 That is good to know too, though I rarely have my old Heathkit IG-18 sig gen on at the same time as the QA402, and it is about 3’ away from it or any other testing gear. I have a similar vise in my workbench area

I have the same vise, HAD an IG-18…have rolled up cables like that, use those plastic containers (mine is for margarine) for parts…and we are probably all around the same age too!

I don’t use the plastic containers for parts, but do save a few lids for when I mix epoxy. For my spare cables I use a Pomona slotted holder rack. As for age, I used to have to write programs using punched cards for most of college, which started in 1977. Waiting 20min to an hour to get your printout only to find that you had a “,” instead of “#” or something so it wouldn’t compile…That I do not miss from “the good old days”.