Hi all:
In a host of places in the QA40x software dBV and dB levels have limited precision, for example:

Thus, I have the following questions:

Thanks much! The QA403 is freaking amazing.

Hi @Derek, I think internally the precision is there it’s just being truncated when shown to you. For the next release, this has been changed in the test plugins so that values default to two decimal points. This better matches with the settings for the generators, which keep and maintain the 2 digits after the decimal point. Thanks for point out. Sometimes the obvious isn’t readily seen.

Also, just out of curiosity, are you looking at amp compression points? There’s are two new plugins coming in the next release. Mostly it’s for speakers, but maybe there should be a version for amps. The first is SPRK Chirp Compression, which is similar what was in the QA401. This will subject a speaker to increasingly higher chirp levels and you can see where the speaker begins to compress across the band. More is HERE

The second is completely new and it lets you subject a speaker to Hann-windowed tones at a range of frequencies and amplitudes. you can specify the burst parameters, and the tresholds. And when done, you get a graph that shows the dBSPL levels for the thresholds you specify (eg 1% and 10%). This would probably be very interesting for amps too, if it were tweaked to speak in watts instead of dBSPL. 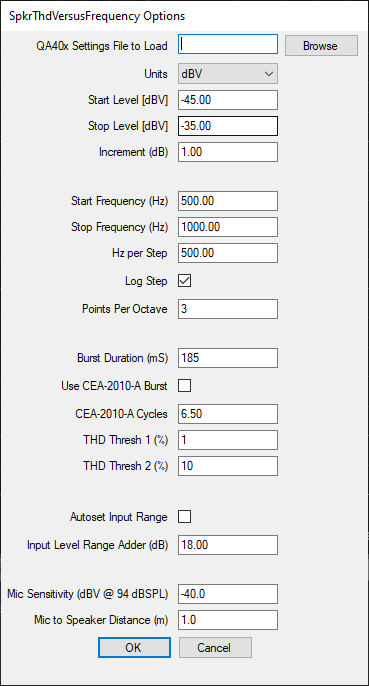 Thank you so much for not only fixing the issue, but also elaborating on compression and testing and the THD vs. frequency testing with Hann-windowed tones. I’ll need to read up a bit on the latter, but yes, looks very compelling.

I’ve also got a laser distance meter (Bauer ala ARTA guide) that I intend to integrate as well!