So I have a .wav file of a 1Khz tone that I ripped off my 1988 Pierre Verany CD test CD. I plan on testing how well some of my CD players (mainly older “walkman” style types I have) to see how well they reproduce it (using my QA402). So of course I need to know what the tone looks like that is being reproduced. I thought I could load or import the .wav with the QA402 and play it back and analyze it that way, but I get this error when I load the file:

I can load the file in Audacity and plot its spectrum, and if I try enough times, I can use the RTA of REW and get some THD readings of the waveform. I do not know if my QA402 has the ability to analyze the waveform by itself, but are there some special parameters needed for the .wav file ? This tone is 20sec long with a 1411kbps bit rate. Thanks as always.

If the file was created digitally, it should be pure with no distortion in it. You can connect the output of your CD player to the QA402 and play the file. The results you get will be accurate.

Thanks for taking the time to reply, David! Indeed I can connector the cd player’s output (line in the case of the two that I looked at) and put in the test CD and measure the tone using the QA402- I have done that. While the tone is not “pure” by today’s standards, it is pretty decent, and so I need to compare “what goes in to what comes out”, and what goes in is the .wav file. I have seen several posts in the forum about .wav files and that is what prompted me to try loading one and got the error shown.

I’m not sure you can set any QA40X up to play back a digital file using the standard QA software, but you CAN send a digital stream to a QA402 for analysis. Sending it thru the digital I/O connector should be possible.

P. S. I don’t have a QA40X, yet, so this is just what I’ve gleaned from this forum.
Matt, could you explain if this is doable?

Thanks for your interest in this topic. Sending it digitally might be possible if I the CD players I was testing had a digital output, which neither does. The strange thing, at least to me, is that I can play the .wav file using the standard media player in windows, or VLC or MPC player and my Surfans portable player, but my MUSICSCOPE software will not recognize it…I can upload the file if others are interested and want to try it themselves…

From what I can tell, the .wav file must be the same bitrate and bit depth that you are running your QA402 on. Eaxmple: 24-48

I changed the sample rate to 48k, which is not the 44.1k used by the .wav , and it still did not work. I did not see where you could change it to something other than 48k, 96k etc. Thanks for the suggestion though!

P. S. I don’t have a QA40X, yet, so this is just what I’ve gleaned from this forum.
Matt, could you explain if this is doable?

Hi @n3mmr, the ADC input on the front-panel isn’t used yet.

Matt- does this mean you cannot load a .wav file to “analyze” at this time ?

Hi @Var, you can load a wave file to see what it looks like spectrally using File->Import Data->Import Wave File

Matt- I tried that and got the error I showed in my original post above, even when I changed the sample rate to 48k. Here is what the manual that came with the CD said about the harmonic distortion measurement tracks (keep in mind this is from 1988 and from France 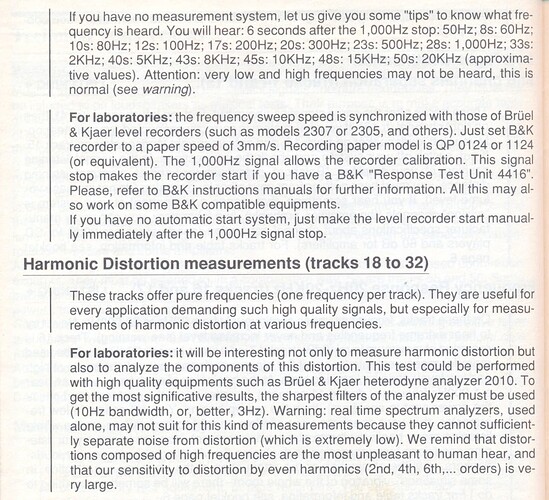 I uploaded the .wav file in question so it can be downloaded if anyone wants to try it:

Hi @VAR, the error I get when loading this file is show below. The WAV file you load needs to have the same sample rate of your system settings. So, the CD file is probably 44.1k sample rate and the QA403 wants to see 48/96 or 192 and as @BarryLambert pointed out, it won’t work.

My guess is the WAV is high-quality 16-bit sine wav, is that right? What do you want to use this file for? Why not just create a high-quality 32-bit wav in Audacity or similar?

After I posted the .wav file I thought about what you said- creating my own 1Khz tone using the QA402 and recording it as a .wav file using Audacity, by my A/D converter is an inexpensive one that works fine for what I use it for, but probably not for this. Possibly Audacity or REW can generate a tone that I can capture as a .wav file and then burn to a CD… What I have will work, it’s just that I can’t use the QA to analyze it as a .wav file. Thanks as always for your time!
Update- I was able to generate a stereo .wave file using Audacity, which the QA402 could read! I had to generate a tone with a 48khz Project rate and export it as a 24Bit signed PCM. Will see what happens when I burn it to a CD…
Update- I burned and played from CD just fine!

Matt,
I think it would be useful if the QA40X software/hardware could handle more sample rates.

Onthe other hand, a 44.1 KS/s audio file could be resampled to 48 KS/s. Using sox, that could be achieved w/o any measurable errors.

I think it would be useful if the QA40X software/hardware could handle more sample rates.

Hi @n3mmr, on the hardware, I’m not sure there’s much gained by adding a lot of sample rates. For example, you can easily measure 44.1 ksps hardware using 48k or even 192k sample rate. The ESS Tech converters in the QA403 show very similar performance at 1 kHz regardless of sample rate (though 48K sample rate is usually slightly better than 192k). The main reason anymore to have a lower sample rate is to trim down the amount of data you are dealing with. That used to not be true–it used to be that the performance of the converter depended a lot on the sample rate.

On the software, ideally you are right, but there are so many applications out there that already handle things like sample rate conversion. If you are going to do a lot of digital audio, you have to get good at a generic audio app like Audacity anyway, so why not use that app to handle the rare times you need sample rate conversion?